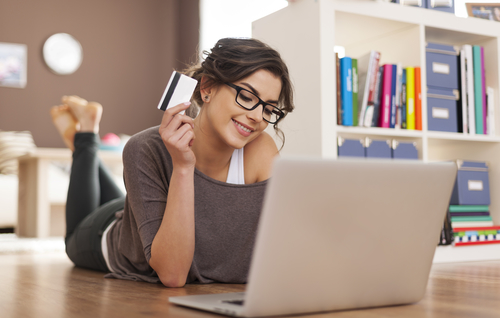 Traditional shops have “physical storefronts.” One can see some of the retailers products in the window, and possibly even go inside. Selling things across the Internet is quite different indeed. It is highly improbable that anyone will bumble onto the web site of a newly formed business, just because of the sheer millions of websites out there. The digital pathways are very complicated, and Shopify has found a way to make sense of them.

SHOP pools together all the places that companies can sell their merchandise simultaneously offering that firm or individual a real-time understanding of how their business is doing. This helps companies maximize the chances of someone entering their “digital storefronts,” regardless of whether they came through social media or a Google search. The business owners simply open their Shopify accounts and all their data is displayed neatly in one place.

SHOP's stock has averaged revenue growth of 105.3% over the last three full-year periods, according to a company press release.

“Digital Fortress Stocks” are defined as tech companies with a strong position in a young market. Shopify fits that definition perfectly. Considering how the economy is leaning more toward freelancers and entrepreneurs.

There are very few lifetime positions at big companies, long term job security is very low, and employee loyalty has become a thing of the past. What we now have is a “gig economy.” SHOP is the “leading cloud-based, multi-channel commerce platform designed for small and medium-sized businesses,” as they describe themselves on their website.

Simply put: Shopify helps other companies set up their online stores in our new digital world.

STARTING SOON: Watch a Pro Trade the Open
Professional Forex trader Josh Martinez will be putting on a live, free webinar that shows in real-time how he trades the open of the Forex markets while explaining the strategies and analysis he uses to find trading opportunities. Don't miss this LIVE event starting soon!
Register for free here

European stock prices were steady in the early portion of the trading day, and were on a course for a second straight week of gains

"Stocks are continuing to get a boost from a weaker euro and the notion that the United States, the world's largest economy, will experience an uptick in growth once President-elect Donald Trump has started implementing his new policies," said Markus Huber, trader at City of London Markets.

The possibility of the Fed tightening monetary policy propelled the benchmark U.S. Treasury 10-year yield to its highest level in more than two years.

Evidence appeared that producers in the Middle East were informing customers of upcoming supply cuts as part of a coordinated effort to drain a global glut, while oil prices lost minimal value on Friday. Brent crude futures were trading at US $53.76 per barrel at at the time of this writing, down 0.48 percent from its last settlement. U.S. West Texas Intermediate (WTI) crude was down 36 cents at US $50.54 per barrel.

Oil producers including Kuwait, Saudi Arabia, and Abu Dhabi, who are members of the Organization of the Petroleum Exporting Countries (OPEC), have notified customers that they would cut supplies from January as part of an effort by OPEC and other producers led by Russia to push up prices. "These greater projected cuts and our strong demand growth forecast lead us to forecast a normalization in inventories... by next summer,"  said Goldman Sachs on Friday.

Under the agreement, production will fall by almost 1.8 million barrels per day (bpd) in an effort to reduce a fuel supply overhang that has weighed down oil markets since 2014. As a result, Goldman Sachs said it will raise its WTI price forecast to US $57.5 per barrel from US $55 per barrel previously for the second quarter of 2017. For Brent, Goldman expects prices to be between $55 and $60 per barrel after the first half of 2017 as reported by Reuters.

The dollar index, which compares the US dollar (USD) against a grouping of six major global currencies, stood at 103.000 after recording a 14-year high of 103.560 on Thursday, when it gained 1.2 percent to post its biggest daily percentage gain in nearly six months.