This Hour: Disney Gains on "Rogue One" Movie Release 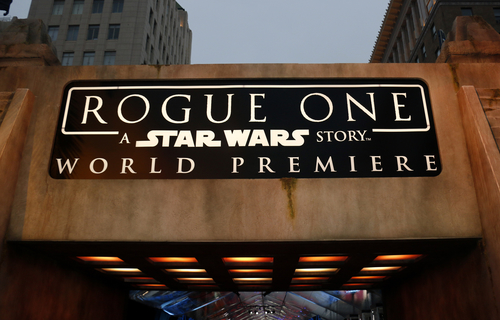 Walt Disney Co. (DIS) stock recorded gains behind a blockbuster box-office weekend for its new "Star Wars" spin-off "Rogue One." Will this new generation of Star Wars' films be just a short-term burst for Disney stock, or a sign of more gains to come?

Disney stock recorded a gain of 2.261%, trading as high US $106.26 on Monday behind the release of the hit movie, closing at US $105.30. As expected, "Rogue One" handily won the number one spot for the weekend box office revenues. The film took in US $155 million domestically in its opening in 4,157 theaters. The global take was an outstanding US $290.5 million. That means "Rogue One" now boasts the second-highest opening in December, behind another Disney production "The Force Awakens."

Episode VIII has a release date of May 26, 2017. That is 40 years and one day after the release of the original movie that initiated the "Star Wars'" cult-like following back in 1977.

RBC Capital Market's Barton Crockett remarked to CNBC on Friday that "Rogue One" is crucial for Disney. "It's not just 'does this movie do well,' but it's the argument that 'Star Wars' can be an annuity business rather than just a flash in the pan [or a] couple of successful movies."

The $290 million global boost from “Rogue One: A Star Wars Story” over the weekend allowed Walt Disney Studios to reach US $6.99 billion for the year through Sunday, passing the previous record of $6.89 billion set by Universal last year.

Four of the Disney movie releases opened with earnings of more than $100 million, an amount more than any other studio in a single calendar year. Disney holds five of the top six domestic openings in industry history, four of which are Marvel titles. The studio also holds the claim to four of the top five animated films of all time. All of these facts surrounding Disney and its Star Wars feature films have the potential to create an extremely interesting investment opportunity whenever a new film is about to debut.

Finish 2016 Strong: Finding Prime Entries and Exits
Follow along with professional forex trader and analyst Josh Martinez as he shows you how to find prime entries and exits to close out 2016 that you may utilize in your own portfolio for potential gains.
Register for free here

Japan's Nikkei .N225 is up 0.53 percent to 19,494.53 after a late rally linked to the Bank of Japan's decision to maintain its -0.1 percent interest rate on some deposits and newly implemented loose monetary policy.

U.S. wheat inched higher on Tuesday, rebounding from an eight-day low touched in the previous session, behind the threat of cold weather to U.S. production which provided some support. Soybeans recorded lower levels, extending losses into a second straight session, while corn remained unchanged. The most active wheat futures on the Chicago Board Of Trade rose 0.1 percent when it traded at US$4.05-1/2 a bushel, after closing down 1 percent on Monday and dropping to a low of US $4.03 - the lowest level recorded since Dec. 8.

Unfavorable weather was supportive for prices, according to many analysts, but the market remained largely unconcerned, reports Reuters News Service. "The market is a bit concerned about the cold weather but the reality is any losses in winter could be easily recouped with some good spring rains," says Andrew Woodhouse, grains analyst at Advance Trading Australasia.

Since the weekend, some parts of the U.S. Plains and Midwest have experienced below zero Fahrenheit temperatures, equivalent to minus 18 degrees Celsius or lower, a level that can definitely threaten wheat crops. Some reports suggest maybe as much as 20 percent of the crop was potentially at risk because of the cold weather.

The dollar index, which compares the US dollar (USD) against a grouping of 6 major global currencies, rose almost 0.5 percent to 103.65 .DXY, its highest level since December 2002.

The Great British Pound Sterling (GBP) recorded one-month lows against a stronger dollar on Tuesday as Scotland's premier said she was willing to campaign for independence from the rest of the UK in order to maintain access to Europe's single market post-Brexit.

"Sterling has been under pressure because of these issues with the potential Scottish referendum, after (Sturgeon) set out red lines on Brexit scenarios and talked about continued access to the single market," says Societe Generale currency strategist Alvin Tan.